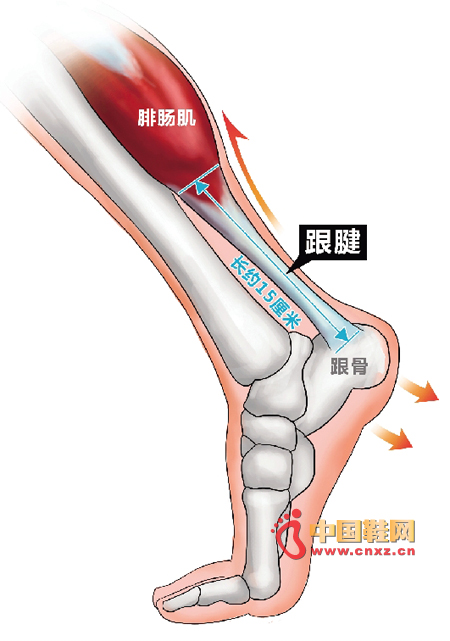 [This site - shoes and life] because Liu Xiang in the men's 110 meters hurdles in the London Olympics preliminaries "shocking a fall", make people more familiar with a word: Achilles tendon breaks. The doctor said that Liu Xiang had caused this waterloo because of a rupture of the right heel.

What happened to the rupture of the Achilles' heel? An interview with the reporter found that in the ordinary people, such injuries are also very common.

"I know the pain of Liu Xiang. I was playing football that day. Suddenly there was a sharp pain in my right leg and I felt a bit stunned." "Playing basketball took a short jump and I heard a bang and felt my left foot hit like a bullet. He fell to the ground immediately.â€ Yesterday, at several hospital orthopedics, the reporter interviewed several people who were hospitalized because of Achilles tendon rupture. Most of them are young and middle-aged and like sports. The youngest is only 17 years old.

"If you don't warm up and exercise vigorously, or if you have fatigued exercise for a long time, women who wear high heels improperly can easily cause rupture or inflammation of Achilles tendon." Orthopaedic experts from a number of hospitals said.

When playing football, I felt a sap hit on my right foot.

Yesterday, Mr. Zhu, 36, with the help of two walking sticks, struggled up and down the special equipment of the rehabilitation department of Zhejiang Xinhua Hospital. "My injury is the same as Liu Xiang!" Mr. Zhu laughed.

He is a football fan and started playing football more than 20 years ago. After attending work, because of busyness, she stopped for a while and discovered that her stomach had become larger and I quickly started to exercise again.

"The doctor said that I was injured because I didn't warm up enough before exercise." Mr. Zhu recalled: "At that time, I was really just twisting my hips and moving my feet. I warmed up a bit and went on."

Mr. Chu kicked the midfielder about 10 minutes, passed a good shot, kicked the ball with his left foot, and he felt that his right foot had been hit with a stunner and was in pain.

After the examination, an orthopaedic surgeon Dong Juqiang described his Achilles tendon as shredded like a piece of torn rag. "Actually, he had an old wound with his sister-in-law and he had already had a spur. This time it was a total outbreak."

"After the injury, will I still play football?" the reporter asked him.

Mr. Zhu immediately said: "I can't afford to hurt, I won't play!" However, Dong Juqiang said that although there are difficulties in playing, as long as he recovers smoothly, jogging is still OK.

Leaping high, the heel was hit by a bullet

The 23-year-old college student Xiao Sun was watching Liu Xiang's game on the hospital bed in the Provincial Hospital of Traditional Chinese Medicine.

Yesterday, he told reporters that he was very sorry to have played too hard when playing basketball. As a result, his left tendon ruptured.

Xiao Sun was a basketball fan and he was also recruited three days before Liu Xiangâ€™s game. In order to grab a rebound, he leaped up high. At the moment, he only heard a bang. He felt as if he had been hit by a bullet and his ankle was loose. He immediately fell to the ground.

The friend hurriedly took him in a taxi and sent him to the provincial hospital for treatment. The orthopaedic surgeon Ji Weifeng found that the broken Achilles tendon had collapsed into the calf. The tendon rupture that occurs in the general movement will not be brushed and broken, but it will be uneven like a horse's tail. This requires the doctor to patience and meticulously tune the bunch of achilles tendons in the operation, and then use a thread to suture.

In order to prevent the traction from breaking again, the doctor plastered Xiao Sun.

According to Jiâ€™s rehabilitation plan, Xiao Sunâ€™s stage of plastering is to rest in bed, and after one and a half months, he can begin to recover.

Heels do not fit, and they wear down

In the orthopaedics department, a 37-year-old middle school physical education teacher has just had an Achilles tendon repair operation.

On that day, at the invitation of a friend to play badminton at the sports hall, he felt that he had a good foundation and did not seriously prepare for playing.

Serve, catch the ball... Teacher Wang suddenly felt like he was punched in the right leg. He called a â€œbadâ€ and immediately dared to move on the floor. Wang, who is familiar with sports injuries, knew that he might have been cut off. He immediately called "120" to the hospital for emergency treatment.

The hospital's chief doctor said that when playing badminton serve and catch the ball, the person's toes are kneeling there. Tendons are in a state of tension. Over time, the muscles and tendons tend to fatigue and may break.