Jade, the beauty of stone also. The Chinese since ancient times, the so-called "Jun has no reason, jade does not go to the body." Since ancient times, jade has been endowed with many beautiful meanings by people of all ages. During the Warring States period, Jade was regarded as a symbol of "virtue". The philanthropic jade and the grandson of the Sun and the nobles of the ancestors became a fashion. According to historical records, Chu Yu is the best among the seven kings of the Warring States. Among the unearthed warring States jade articles, most of the jadeites with soft shapes are Chu Yu. Experts say that they are related to the beauty of the Chu people and also reflect the unique Chu Yu culture.

In the 1970s, a dragon-shaped jade was unearthed in the tombs of the Chu nationality in the late Warring States Period discovered by the Yanggong Commune in Changfeng County. The appearance of this jade has still been praised by many experts and scholars. At the same time, this type of dragon-shaped jade is more regarded as the best footnote of the jade features of the Warring States period. 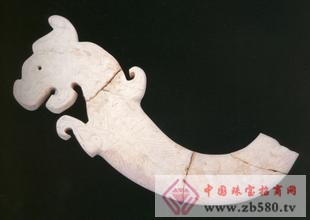 Dragon-shaped jade from the noble tombs

In January 1977, the peasants of Yanggong Commune in Changfeng County discovered an ancient tomb in the process of building water conservancy. Many of the bronze wares were unearthed in one of the excavated horses. Although the local farmers did not know what these were, they all Listening to the ancestors said that this place was once the site of Chu. Soon, the news reached the province. In the same month, experts from the Anhui Provincial Cultural Relics and Archaeology Team began excavation work in the local area under the cooperation of the Hefei Cultural Relics Management Office and the Changfeng County Cultural Relics Management Office. What surprised the experts, however, was that there was more than one ancient tomb, but a tomb of the nobles of the Chu State in the late Warring States Period. As a result, a four-year, four-time archaeological excavation work began.

In January 1977, October 1977, 1979, and 1981, the experts divided 11 tombs and a horse-horse pit in the area, and more than 240 pieces of bronzes, pottery, and jade were unearthed. "Several pieces of jade jade, including this dragon-shaped jade, are excellent in making jade. They are made by Hetian jade. The workmanship is very beautiful. It is no exaggeration to say that they represent the exquisite craftsmanship level of the Warring States Period and also show the Chu State. The unique charm of jade and jade culture, so suddenly there was a sensation in the country, and also provided a batch of new materials for experts to study the Chu culture in the Warring States Period." Sun Chaofeng, deputy director of Changfeng County Cultural Relics Management Institute and Wenbo Librarian said .

The finest in the Chu-shaped dragon-shaped jade

The dragon-shaped dragon pig made of jade first appeared in the Hongshan culture period about 6,000 years ago. From the point of view of artistic expression, the early Yulong appeared to be relatively ancient, and gradually became free and easy during the Spring and Autumn Period. A large number of dragon-shaped jade appeared in the late Spring and Autumn Period, and reached full prosperity in the Warring States Period, becoming one of the most representative jade articles of the period.

The Chu people have the tradition of respecting the dragon, so the Chu-style dragon-shaped jade is the most distinctive, and the dragon-shaped jade unearthed in the Yang Gong Tomb can be called the fine of the Chu State Dragon-shaped jade in the late Warring States Period. I saw this piece of jade dragon with a length of 15 cm, a width of 6 cm and a thickness of 0.4 cm. It looks vivid and airless. Looking back into the distance, the dragon is also engraved with a cirrus pattern, which makes this dragon add a piece of "fairy." ". But unfortunately, there is a little defect in the tail of the dragon.

"This dragon-shaped jade is a piece of jade that is suspended from the body by a series of jade. From the distribution of the hole shape of the dragon-shaped jade, it seems that it should be in the middle of the connection of the upper and lower jade ornaments. The production of the jade jade is known for its ingenuity, and the shape of jade is flexible according to its position in the group jade, reflecting the artistic style of the jade craft of Chu.â€ Sun Chaofeng told reporters.

Dragon-shaped jade is noble and noble

In the 22nd year of Chu Kao Lie Wang, the Chu State moved to Shouchun, the Jianghan Chu culture and the Huaiyi Aboriginal culture were further integrated, forming the Jianghuai Chu culture centered on Shouchun, becoming a major branch of Chu culture and also a traditional Chinese culture. important parts of. In Sun Chaofeng's view, the Yanggong Commune is located in the north of Changfeng County and borders Shou County. Therefore, it is reasonable to find a tomb of the Chu State aristocrats with such a high standard.

During the Warring States period, a hundred schools of thought contend and art flourished. At the same time, the iron and steel industry was also very developed. At that time, people began to use ironware in large quantities, all of which created cultural and technical conditions for the flourishing development of the jade carving industry. .

Sun Chaofeng once studied the jade culture of Chu State. He said that Chu is a country that likes jade, and even has a specialized agency in charge of jade, Yufu, which specializes in the production of jade and other valuable objects for the king of Chu and the nobles. The aristocrats of Chu also loved jade, especially the jade, which is the so-called "the ancient gentleman must wear jade." At that time, the nobles were wearing a group of jade, not only for pure decorative purposes, but also because jade has the characteristics of hardness, moistness, purity, and beauty, so it is regarded as a symbol of perfect human morality. De Yu Yu." In Chu State, the number of jade articles and the quality of jadeware represent the social status and rank of the aristocracy. Therefore, from the material, craftsmanship and quantity of the unearthed jade, the identity of the aristocrat of Chu is not to be underestimated.

We are professional customized 2D keychain, 3D keychain, blank keychain, hollow keychain, iron keychain, brass keychain, alloy keychain, aluminum keychain, PVC keychain, arcylic keychain, metal charm, mobile charm etc. All for souvenir ,decoration , gift and so on . The most popular material is zinc alloy , but we could also make it by iron, brass, stainless steel ,stainless iron,Aluminum,PVC. The plating color is usually is gold , pearl gold , nickel ,pearl nickel , black ,rose gold ,bronze ,copper ,antique silver and so on . For the custom metal Keychain, also we could make sticker on it, printing your logo on the sticker , engraved logo on the product , Enamel Keychain is means painting color .For trolly Coin Keychain, laser engraving the logo could be acceptable.